On National Aviation Day, August 19, the nation celebrates the anniversary of the birthday of Orville Wright. Starting this Friday, NASA invites you to join the celebration of flight and everything it makes possible by taking our Orville flying squirrel along with you and posting a picture with the hashtag #WhereIsOrville.

Our heritage in aviation research goes back more than 100 years. We’ve helped air travel become a safe, reliable form of transportation. But wersquo;re not finished. Wersquo;re working to transform aviation into something even better by perfecting new technologies, including those that could lead to shape-shifting wings, electric propulsion and the return of commercial supersonic flight.

Every U.S. commercial aircraft and every U.S. air traffic control tower has NASA-developed technology on board.

NASA is with you when you fly!

This National Aviation Day Use social media to tell us where your Orville is on the day we celebrate flight. 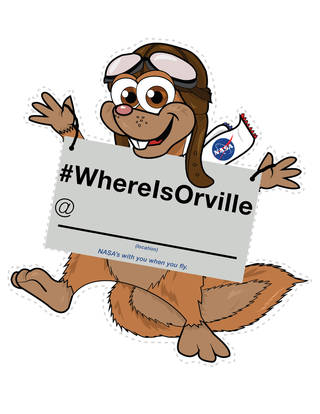 Print me! Write in your location, take a photo and post starting August 19.

Take a selfie with Orville, or a regular photo of him in your location. Be sure to write in where you are.

Charlie Sattgast is the Deputy Chief of Chaplains for Civil Air Patrol.

Civil Air Patrol’s Chaplain Corps is supporting the “Be There” Campaign of the Defense Suicide... Read More

On Wednesday, 30 August 2017, at the conclusion of the annual meeting of the Civil... Read More

The Summer 2017 issue of the official newsletter of the Civil Air Patrol Chaplain Corps... Read More

On Tuesday, 5 September, responding to an urgent request from the leadership of the... Read More

Become a CAP Chaplain or CDI

Learn More
We use cookies to ensure that we give you the best experience on our website. If you continue to use this site we will assume that you are okay with it.OkPrivacy policy